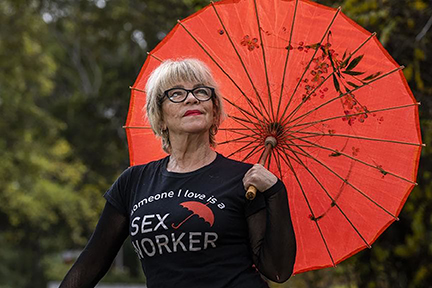 The SWOP office, and the sex work community, were delighted to hear that long-time sex work activist, Julie Bates, was recently recognised as part of the Queen’s Birthday Honours List, with an Order of Australia, for “distinguished service to community health, particularly through harm reduction programs for sex workers and people with substance abuse issues, and to those living with HIV/AIDS.”

For much of her adult life, Julie has been engaged in social justice activism and, by definition, legislative protections for the most vulnerable and marginalised among us. Her early years as an entrenched law clerk at a Melbourne criminal law firm saw her taking evidence from complainants, including sex workers and drug users, for the Beach Inquiry into alleged police corruption in Victoria.

In 1986, Julie became the first in-house manager of the Australian Prostitutes Collective NSW, whose receipt of government funding represented a significant step in the promotion of sex worker rights nationwide, and eventually saw it morph into our very own Sex Workers Outreach Project, the longest-running, continuously-funded, peer-based sex worker organisation in the world.

Julie’s involvement with the sex work community saw her give evidence before two parliamentary inquiries; the NSW Rogan Inquiry in 1984, that recommended the decriminalisation of sex work, and the 2015 parliamentary inquiry into the regulation of brothels, whose outcome saw the retainment of decriminalisation in NSW, recognising the model as best practice for the ongoing health, safety and well-being of sex workers.

All of Julie’s activism has been geared to improving the legal and social position of sex workers and other marginalised and criminalised people. Her contribution to the fight for law reform, labour rights and anti discrimination protection is born out of and is a reflection of her own experiences in life.