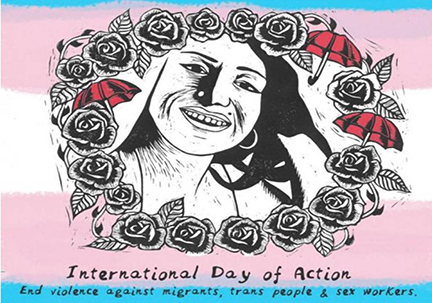 International Day of Action in Memory of Vanessa Campos

This Friday 20 September sex workers in all major cities across the globe will publicly mourn the death of sex worker Vanessa Campos, murdered in August 2018 whilst working in the Bois de Boulogne in Paris.

We mourn in public as violence against sex workers is often not reported in the media, and when reported is often sensationalized and blames the victim for the violence that befell them.

We mourn in anger because so many acts of violence against sex workers occur directly due to the full or partial criminalization of sex work that occurs globally (including legalization and registration models). The murder of Vanessa Campos in the Bois de Boulogne was facilitated by the recent criminalization of the clients of sex workers (the so called Nordic or Swedish model) by the French government. This law robs French sex workers, particularly those already marginalized and persecuted, of their personal safety at work by forcing them to work in areas and situations where they have little or no control over their personal safety.

Vanessa Campos is not the only sex worker to suffer violence and/or death due to the laws and policies of governments globally. There have already been many cases of death and violence on sex workers this year.  Sex workers worldwide are continually put in danger by their governments and by laws that criminalize us, our work, our clients, our workplaces or ancillary activities that support our work (such as outreach and distributing safety information).

Just this year April, 2018, Medecins du Monde France published research on impact of the new law which showed that

The more marginalized sex workers, including trans migrant sex workers like Vanessa are those most affected by these laws.

The Nordic model laws in France that killed Vanessa Campos are just one example of the detrimental and sometimes lethal effects of these laws. Laws passed earlier this year in the United States known as FOSTA-SESTA are aimed at not allowing sex workers to access the internet and so sex workers are not only not be able to advertise but also prevented from exchanging safety information.

Even here in New South Wales sex work is not fully decriminalized and the breadth and intention of the decriminalizing legislation and the parliament that passed it has never been fully realized or totally implemented.  A major factor in not implementing a fully decriminalized framework for sex work and sex workers in New South Wales has unfortunately been due in part to the retention of criminalized models in the jurisdictions that surround NSW. A circumstance that also stigmatizes sex workers and puts in place structural barriers to proper reform.

We call for the immediate decriminalization of sex work worldwide and the immediate removal of Nordic Model Laws (that often masquerade as laws that decriminalize us) in countries where they have been adopted.

We further insist that the lives of of sex workers, our lives, be valued equally with other lives.